While working at the “One of a kind show” I found one booth ” Hazeltree press & paper”  selling  hand-made paper made with actual flowers. When I was in art school, I took classes in paper making so I understood … END_OF_DOCUMENT_TOKEN_TO_BE_REPLACED

It been raining all day here, I stay home taking a break taking photos of the autumn leaves but to work on my painting. This is the result, “orchid at night” watercolor 10″x14″

Every autumns I look forward for the arrival of the persimmons. I could hardly wait to bite into a ripen persimmon.  its orange flesh and the custard like sweetness, a perfect treat for as a afternoon snack. watercolor on arches … END_OF_DOCUMENT_TOKEN_TO_BE_REPLACED

I was cleaning up my studio and came cross some old works I done which I completely forgot. I post a couple of them on my facebook and mentioned on my find. Almost right away, someone I don’t know comment on it and asked if it for sell. ( he is friend of another of my facebook friend)  I sent this person a reply of yes and the price, right away it was sold and I was sent the money via PayPal!  now my painting is on its way to California . 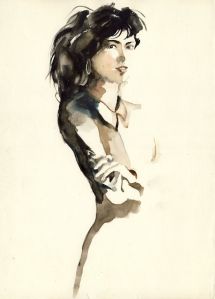 I particular like the yellow Phalaenopsis orchid because when the blossoms open the color almost looked green, usually take a few day for it to turn yellow.
I painted this watercolor a few months ago but was not to satisfy with it. It seems needs something more but I couldn’t think of what to add so put it aside. 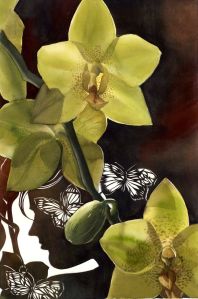 Last week, I took it out again and an idea came to me: The Phalaenopsis orchid’s common name is butterfly/moth orchid. I decided to play with the name and process to add a woman surrounded with butterflies in the background
Here are some shots from beginning to the finished work. 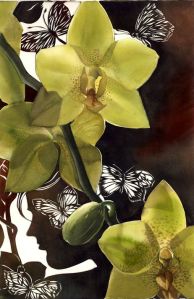 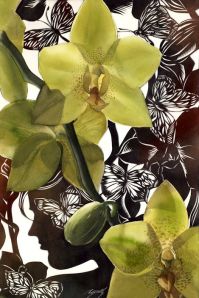 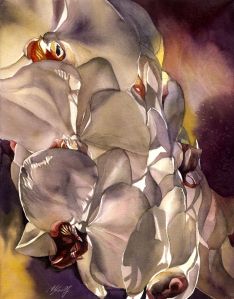 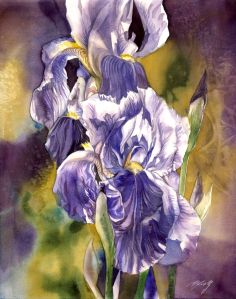 It has been snowing all day here in Toronto. As soon as I get in my studio it just started to snow and haven’t let up. I love the snow; it looks like the dancing snowflakes cover the streets with a white blanket. The streets are is quite without the shoppers and few cars are on the road. I enjoy the warm inside and work on my paintings.

I don’t know if other artists are like I do, I like to work on more than one painting at a time. Both finished this afternoon.  Both the pink orchid and the blue iris are 16”x20”, on Arches 140lb rough paper. 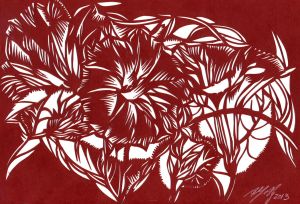 My originally idea was to work on a simple paper cut of a morning glory maybe the most to spent a day on it.  Somehow as I work on it, it was getting more and more intricate and time consuming.  I end up spent three days on this small paper cut. 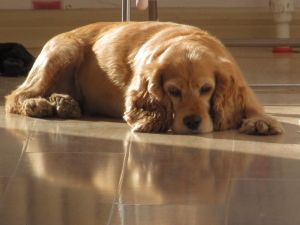 After five days of hospital stay, Michael was discharged from the hospital. Our original plan when I first arrive in Qingdao was travel to Shanghai during the national day holiday. However it needed to be canceled as the doctor’s order was to have plenty of rest and stay away from oily food for awhile.

I was not too disappointed with the change of plan. While he was hospitalized I had get to really enjoy living at his apartment and it felt like my second home. I also enjoy making daily shopping and making the meals.

October first national holiday is an important holiday day, many would take advantage for the seven days off to travel back home to visit families or travel to other cities.

Qingdao being a well known tourist destination was no exception. Over night, the city population has increased and all the tourist sites were packed with smiling faces and happy voices.

Michael received a call from a couple at his work and asked if he could look after their dog while they travel out of town. Coco is a Cocker Spaniel about seven years old. She is a lovable and well behaves dog; she loves to lie at the sunny spots and really enjoyed her company. She has an unusual habit as she loves to collects rocks. Whenever we took her out for a walk, she would pick up a rock and carry it in her mouth to bring home. She doesn’t just pick up any rocks, some she would walk by without stopping; eventually, she would found the one to her liking and she would keep it on her sleeping rug and lie next to it.

When it was the time for Coco returns to her owners she did not take her rocks with her. We kept them on the shelf for her next visit. 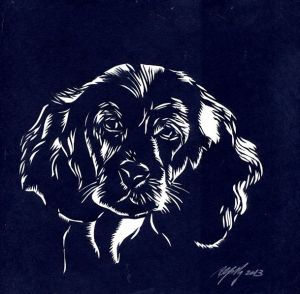 I got few emails asked to explain how my paper cut watercolor was done. Here is the step by step explanation

First I work on a watercolor painting and when it done, I would think about where to  add the second design elements with paper cut.This one of the grasshopper I wanted to add some more grass as the background. Although it is a small painting (8’x9″) but I wanted to challenge myself to do some very fine lines and details. 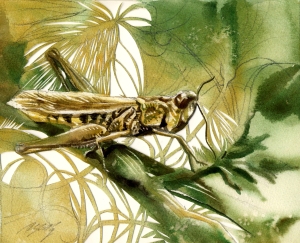 The painting took about four hours but the cutting took about eight hours. The finish piece is a lot like a piece of lace. I took it out to the park near my studio for a photo. 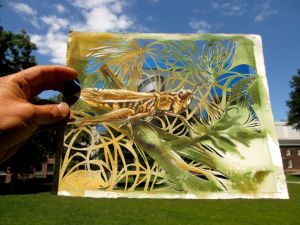 I am quite happy how it turned out, the white area are the mat board I use as backing. I could change to whatever color I wish. 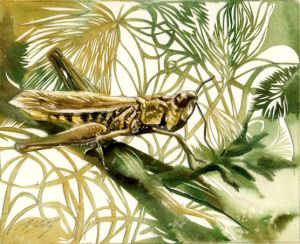 I even have a name for my hybrid art “Dis-Constructive Watercolor”.

i have a number of frames in my studio. I found this handsome black frame which is more than inch deep and it was perfect for the grasshopper..I built up on the mat to about half inch thick which added extra distance between backing to create the shadow effects for this. 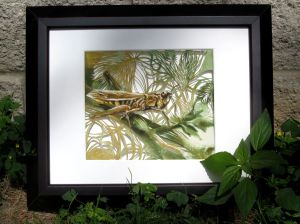 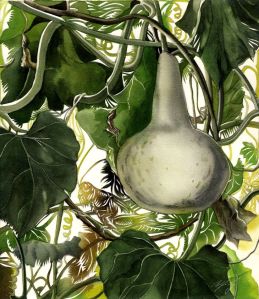 I post my latest work, another dis-constructive watercolor ( a combination of watercolor and paper cut) on my flickr account this morning and received a comment: “this is very interesting art, is it laser cut?”

I guess I might need to explain how I make them each time I upload one.

Here is today dis-constructive watercolor, “bottle squash with grasshopper”, watercolor with paper cut, 16″x14″. The squash is from my mother’s garden.