Although I had been spending most of my time producing the “a painting a day”.  Since last month I done about 30  of them and they are mostly small paintings, some days I could finished more than one per day. … END_OF_DOCUMENT_TOKEN_TO_BE_REPLACED

Today’s painting is a little different from the others, it is done in the style of the Chinese ink painting. I used a limited colors to create that misty look. watercolor on arches cold press paper, 9.5″x10″. 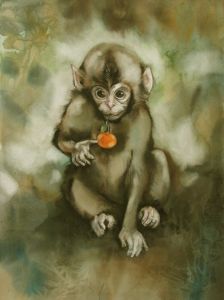 This year is the year of the monkey according to the Chinese calendar. I painted this babay monkey watercolor painting to celebrate the Chinese New Year, he is carry a tangerine in his mouth and the tangerine is an important symbol for the new year which means good fortune and wealth. 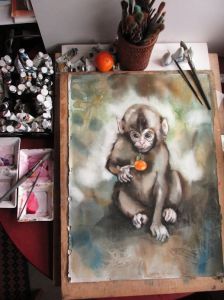 I started some poppies from seed this spring which grow into small plants and was told it will not produce flowers this year. My poppy seed has an interesting story: a couple of years ago, just before I travel to … END_OF_DOCUMENT_TOKEN_TO_BE_REPLACED

Today, is the beginning of the Chinese New Year, the year of the sheep. During the ten days celebration, often you will see the lion dances  perform but the dragon dance is less often  because it requires a team of … END_OF_DOCUMENT_TOKEN_TO_BE_REPLACED

This year the Chinese New Year is on February 19, the year of the Sheep. Every year, I would celebrate this special occasion with a painting and this year is even more special because I was born on the year … END_OF_DOCUMENT_TOKEN_TO_BE_REPLACED

Beijing has some very impressive art museums. I had been to the National museum three years ago and was amaze with the size and its collection. A friend of Michael told me another one, the China art museum is only … END_OF_DOCUMENT_TOKEN_TO_BE_REPLACED

There is a large square in front of the St. Joseph Cathedral in Beijing: one afternoon as I approaching I could hear rather unusual music playing, it sound Middle Eastern. As I getting close I could see a small crowd gather at one corner, to my surprise a Chinese woman in sunglasses and dress in a colorful costumes was doing a belly dance! The crowds seem to enjoy her performance I watch her for a while took some photos then go on my way.
Later, I discovered, there always some activities going on at the square, from early in the morning till late at night. it could be groups of men playing chess, wedding parties using the cathedral as backdrop for wedding photos.
One afternoon a young man was there lip synching, dancing with an empty water bottle, as he was rehearing for an singing contest

At night, it was even more interesting; two groups of dancers, one of mainly middle age man and women, doing the slow ball room dancing. The other was a group of young guys doing a combination of hip hop with break dance. They seem to respect each others’ spaces with an invisible line separated the two at the middle of the square. Both had their own music (big band music for the slow dancers and hip hop for the young guys) they were illumined by the moonlight above and lights from the billboard across the street. 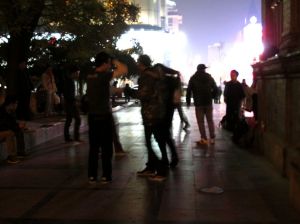 After staying two days in my noisy hotel, Michael has returned from his business trip from Saipan Island. Sunday morning, I returned from my morning walk he was standing in front of the hotel waiting for me.
His home just a short walk away but before I got a chance to unpack my bags we needed to pay a visit to the local police station.
Few tourists know about this: as a visitor not staying in a hotel, I have to report to the police and let them know where I will be staying.
On the back on the entry card to China, under important notice:
“Alien who do not lode at hotels, guesthouses or inns shall, within 24 hours (72 hours in rural areas) of entry, go through accommodation registration at local station”.
We had done this the last three times when I visit Michael so we knew what to prepare:
We brought our passports, his work permit, house lease and photocopies of our passports and my entry visa. I learn from past, police station do not equips with photocopier and often it is not easy to find a photocopy place near by so I had brought copies with me from Canada.
We also knew the police station closed during lunch time so we make sure to arrive afterward.
Luckily, there were only two people ahead of us, in on time I was registered and I can officially stay in Beijing!
As we were leaving the station, I stopped and ask Michael to take a photo of me in front of the station but before he could a uniform policeman was returning from his lunch break.
He looked at us, I explain to him we are Canadian and I just registered for my stay in Beijing. Without thinking, I asked if I could have a photo with him. A man nearby has been watching us, he good naturally push the surprised policeman next to me. We were all smiles and I had my photos with the policeman
I thanked and shake hand with him we happily went home.

In recent years with Starbucks opening shops in China finding coffee in China has became lot easier. Since then, other coffee shops had follows which open everywhere. However, tea is still the preferred beverage here and coffee is more expensive here than in North America, a cup of coffee could cost $4, $5 or even more at some pricy coffee shops. (For that amount one can buys a good meal)
The China McDonald offers a lower price coffee compare to Starbucks for the one in need. The McCafé section is usually has no line up with eager staff to serve you
There are two McDonalds at the Wangfujing pedestrian mall; one is in a large shopping mall and the other one which is larger with two levels at a busy location and longer hours for business.
I went for the other one that morning. The breakfast combos are same as the ones in North American with a new twist: one can choose either Soya milk or coffee.
Even it was early in the morning but the place was busy with customers already.
After I got my meal, I went upstairs thinking it would be less crowed and allowed me the street view from above. However the intriguing view was inside and not far from where I was sitting: a number of young men were sleeping on benches; some completely lay down still wearing their shoes and some sitting up resting their heads on the table. They were cleanly dressed with new looking clothing some had a large backpack by their side.

While eating I was also observing the other customers but no one seem to paying any attentions to them beside myself. One man, look to be in his early twenties slowly sit up from his bench, after rubbing his eyes then spit onto the floor in front of him.
A man nearby wearing government uniform didn’t pay attention to the man but keep reading from his phone. Meanwhile a group of young women had arrived and chatting with each other while putting on their makeup.
Finally, a uniform security came upstairs but instead of telling the sleeping men to leave, he merely looked around and went back downstairs without waking anyone.
Later, at other McDonald, I noticed men would also hangout there without ordering any food.