I always interested in architecture, about twenty yeas ago I found a book, “Toronto carved in stone” which full with interesting facts on the historical buildings of Toronto. I took it to work and showed it to my then co-worker, another designer. She was as excited as I was and asked to borrow it among other books I had brought in. That was the last time I ever seen those books again. Although she mentioned a few times she still has my books and meant to bring them back to me, somehow I knew she has no intention to return them. Eventually, both of us left the company and we lost contact.
Ten years ago, at one of my art opening she showed up. I was surprised and happy to see her. We catch up to what we been doing since we left the company. She has remarried and brought her young son to my show. After some more small talk she brought up the books she still has and I could tell she has been feeling guilty of the non return books. In order to erase her guilt, I told her not to worry but to keep the books.
The last twenty years, whenever I in a used book store I would look for my missing book but always left empty hand. My book has long been out of print since I brought it and became hard to find. Later, I found a copy on the web but the price was expensive. The last time I check it was selling for $132 on Amazon.
Today, I happened in the university campus area and saw the banners of its book sale. I went in and was not expecting to find my long lost book in a perfect condition, signed by the authors for $5!

Yesterday morning when I was checking my emails, I was surprised to see I had more than usual amount of emails. It didn’t take long to realize it was for an image I post on Flickr the day before:
I post a watercolor of a Lotus which I just finished. This painting was chosen on the “explore” home page. In the past, I had other photos and one painting chosen on explore but seldom seen a painting on explore.
All day long, I keep getting email alerts as people pick as their faves. Some even comment my painting as “great shot!” it kind made me laugh
So far, after more than 24 hours later, my painting has 58,582 views, 235 faves and 20 comments.

Today is the autumn moon festival which is a important festival in Chinese culture which not unlike the Thanksgiving in North America.
One of the traditions is friends and families would give gift of the moon cakes. The traditional moon cakes are made with lotus seed paste, brown sugar and with the salted duck egg yolk. When I was a kid I always look forward for this festival and the opportunity of tasting the moon cakes. Since the cakes are use as gift they usually come in fancy boxes and the more expensive one are even more impressive.
A couple years ago, I was in China just after the autumn moon festival. One morning, I discovered a very beautiful moon cake box been discarded near my friend’s apartment. The box was like nothing I ever seen; the outside was made with silk fabric with flowers and birds pattern and a gold silk cord as handle. Once untied, there are there compartment with silk linings. It came from the Shanghai Marriott hotel. I couldn’t resist picking it up and took the exquisite box back to Toronto with me. 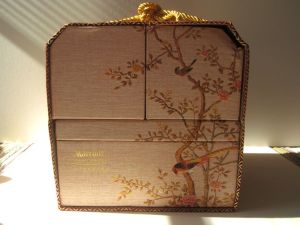 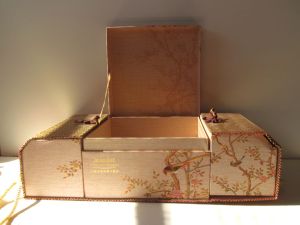